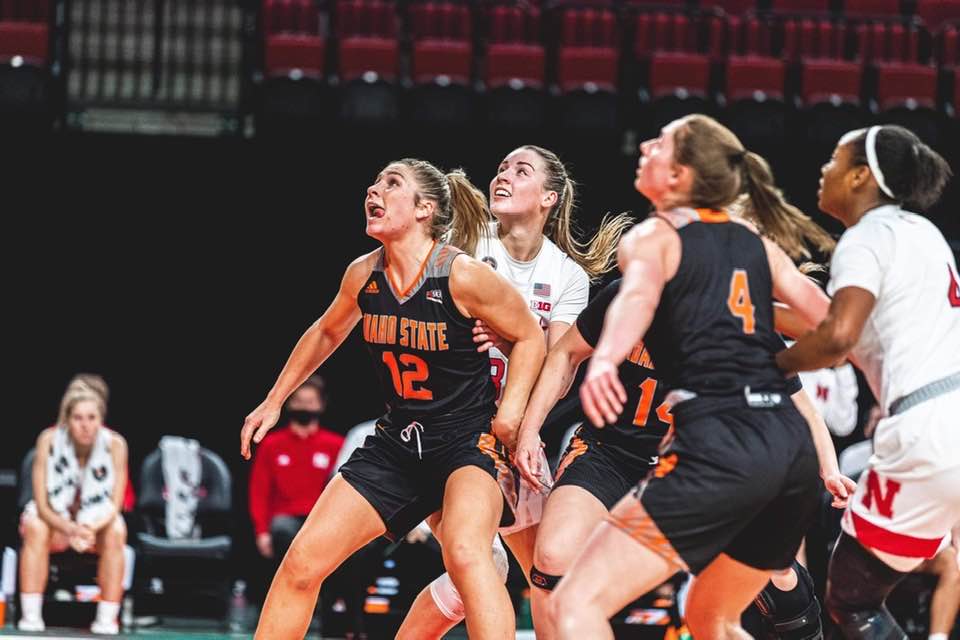 Amongst the chaos that is the US College basketball season, one consistent result has been the performance of both Callie and Isabelle Bourne for their respective teams. Both are putting in dominant performances game after game and setting the tone for the season early.

In her third season, Callie is playing a significant role for her team, topping the stat sheet in most outings.  In their season opener, Callie “… was on fire, shooting 5-9 from the field and 2-3 from three while leading ISU with 11 boards, five assists, and three steals” (full story). While producing significant results in points and rebounds, she is also regularly achieving game-topping numbers of assists (avg 4 per game) and steals (avg 2 per game).

Now a sophomore, Issie has taken on an increased workload within her team and is now spending an average of 30 minutes on the court per game.  Averaging over 13 points per game, she has recorded a career high of 21 points in only her third game for the season.

“Bourne was just as big for the Huskers on the night, especially down the stretch. The 6-2 sophomore forward from Canberra, Australia, scored eight of Nebraska’s first 10 points in the fourth quarter to help rally the Big Red. She surpassed her previous career high of 16 points, which she set last year in the Big Ten Tournament against Michigan. Bourne went 8-for-13 from the field while adding eight rebounds and Nebraska’s other two steals in the game” (full story).

Without exception, our athletes’ teams have been impacted by Covid 19 infections and restrictions. In addition to having no – or limited – spectators, there have been game cancellations and shortened seasons.

So far, all our D1 athletes have made their debuts and there have been some spectacular performances (see above and below).  Only a couple of our D2 athletes have seen their seasons commence, and no D3 or junior college teams have taken to the court.  The majority will kick off in the New Year with Conference only fixtures.

Bul Kuol, who transferred as a graduate to the University of Detroit Mercy Titans, has had a solid start to the season with his new team, averaging 12 points and 4 rebounds per game.  His standout performance is a career high 18 point game against powerhouse team Notre Dame. Bul will expect to be a significant contributor to a team which has struggled in its last few seasons.

After spending her first year in the US as a ‘red shirt’, Rosie Schweizer has transferred to D1 University of the Pacific Tigers. Making her debut performance only last week, she is already averaging 6 points per game after only two games.

Despite many game cancellations so far this season, Pyper Thornberry has taken to the court four times to start her Freshman year.  Scoring in double digits (10 points) in only her second game, Pyper looks set to have a solid first season.

Glenn Morison has elected not to return for the 2020-21 season.

Maris Colton‘s Metro State University Roadrunners started their season early in December.  After three games, in which he averaged 3 points per game, he has experienced a season-ending shoulder injury.

Nate Brown and Austin Clarke, both now Seniors, have had limited outings.

Dhal Fieg will leave at the end of this month to join the South Georgia Technical College Jets, a D1 NJCAA college in Americus, Georgia.  Story to follow ….

At this stage, there are no games scheduled for the remainder of the year for remaining ACT athletes.

(Apologies for any errors or omissions.  Please let me know of corrections required.)