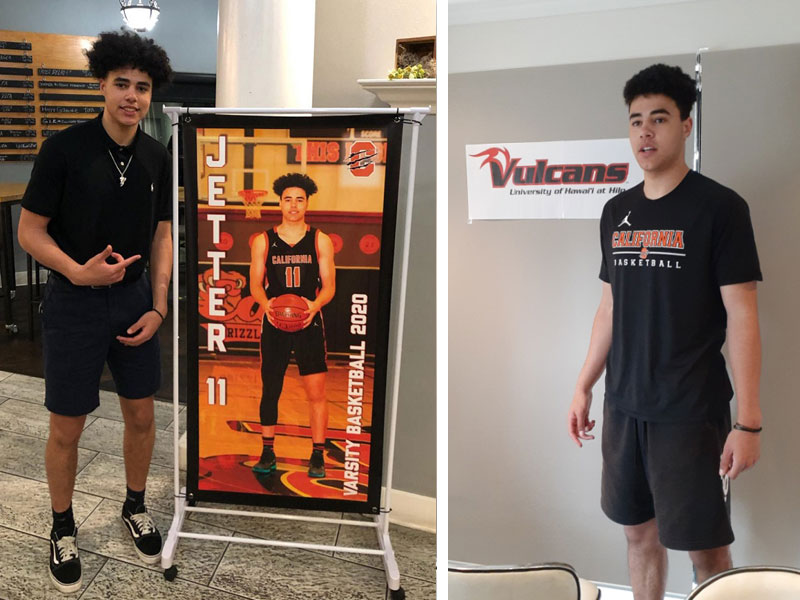 If you are reading this and thinking that you had not seen much of Ethan Jetter on the basketball courts in the ACT for the last few years, you would be right. Unlike many of his contemporaries, who are now regularly competing in the Premier League and Waratah League competitions, Ethan has made only one or two appearances of late.

His absence, however, has not been due to a lack of interest. Indeed, it stems from the fact that his passion for basketball led him to the US as a 16-year-old to follow his dream and improve his chances of playing basketball at a US college. In fact, according to his parents, Kimuel and Catherine, Ethan has been manifesting his basketball career from a very early age. He posts his goals on his wall, and once the upcoming College basketball season commences, he will have ticked off two significant ones – go to school in the US and play College basketball. While his goals do not stop there, what he has achieved – largely on his own initiative and with much hard work – has been inspirational.

Turn the clock back ten years, and eight-year-old Ethan joined Ginninderra Rats after watching his sister Myah play basketball. He had the good fortune to be coached by Linda Muir for his early years:

“I know Linda Muir was probably the best coach he (and the other boys) could have. She reinforced the fundamentals and built a strong foundation under them all and taught them well including focus and discipline and how to work as a team. She really got the best out of all the boys.” Kimuel Jetter

Ethan continued to play with Rats until Under 19s, and extended his skills by participating in SJL, the PSSA competitions in 2013 (Perth) and 2014 (Townsville), and later at Under 14 Club and both Under 16 Australian Junior Champs.

Ethan knew that, despite his skill level, one key factor in attaining his dream to play in the US was to be academically eligible. After spending four years at Campbell High School, he set his sights on finishing high school in the US. With the benefit of dual citizenship and the opportunity to initially live with his uncle in California, Ethan set his sights on studying Year 11 and 12 in the US.

Arriving in San Ramon, California in July 2018, he enrolled at California High School, the home of the Grizzlies. After first competing in AAU tournaments for three weeks, he started classes on his 17th birthday.

In the words of both Ethan and his coach, the quality of the basketball team was ‘pretty average’. However, games were still played in a packed stadium and the crowd support was intense, both from parents and the student body.

“Honestly I’d say it is pretty similar to the movies. Just playing in front of a huge crowd full of peers and parents was overwhelming at first because I wasn’t used to it. The atmosphere that you get to play in is second to none. Super crazy and unlike anything I’d played in before.”

Ethan’s arrival on the team had a big impact – particularly on the Head Coach:

“Ethan was well liked by everyone of his teammates right away. He was kind and humble. He possessed a rare combination of character traits given his exceptional athleticism and basketball talent. He was a dream to coach.”

“Ethan was a generational talent that a coach like me was blessed to be able to work with. I relate it to winning the lottery as far as being able to have a player with Ethan’s ability in my program”. Head Coach Anthony Khoo

Ethan’s impact translated to the stats sheet. Over the course of his final season, he was the team’s most significant contributor. Finishing with 16 ppg and 5.2 rpg, he was responsible for double the output of their next best player. 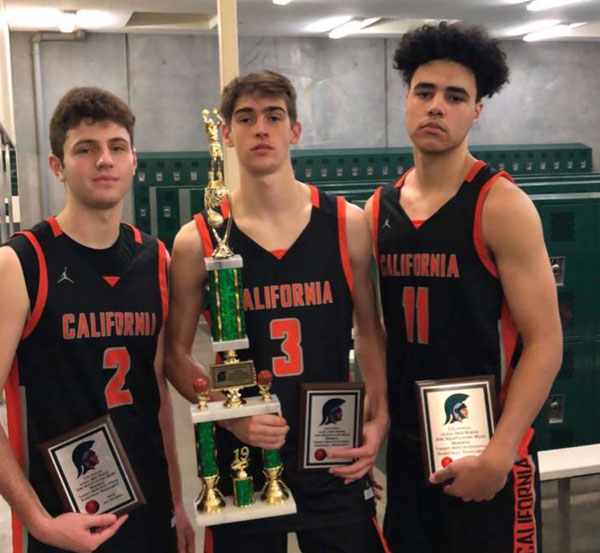 At the end of his Junior high school year (Year 11), Ethan competed in AAU tournaments and attended a number of College camps.

Ethan was fortunate to draw enough attention during these College camps that he attracted several scholarship offers. The one that was most attractive was with NAIA Menlo College. During the recruitment process, the Head Coach at Menlo College was Coach Kaniela Aiona. In the five years he spent as their Head Coach, the program recorded a 72-71 record and earned a place in the NAIA Division 1 National Tournament for the first time in the program’s history. Ethan felt a strong connection with Coach Aiona and accepted a scholarship with Menlo College.

In what seemed like a bitter twist of fate at the time, Coach Aiona himself was recruited from Menlo College to the Head Coach role at University of Hawaii at Hilo (Coach Aiona is a Hilo local). As some of you will know, during the recruitment process a close bond can be formed between coaches and athletes, and Ethan felt a sense of disappointment that he would not be able to play under Coach Aiona. Because of this, Kimuel approached UHH and initiated a discussion about the possibility of Ethan attending the University and being a part of the program. This conversation resulted in an opportunity for Ethan to attend UHH.

The University of Hawaii at Hilo is an NCAA Division 2 college located in Hilo, Hawaii. UHH, with its beautiful campus and idyllic location, is the home of the Vulcans.

Hilo is located on the Big Island, on the north-eastern side. It is a breathtakingly beautiful location, but Ethan will not have a lot of spare time to experience that beauty. In addition to full-time study, up to 20 hours a week at training and two games a week during the season, the team will travel to mainland USA on a regular basis to compete in California with its Conference partners.

The Vulcans compete in the PacWest Conference, which also includes the Concordia University Irvine Eagles (the Alma mater of Tad Dufelmeier and where Austin Clarke will compete as a Senior this season). Until recently the PacWest also included California Baptist University – Bul Kuol competed in PacWest as a Freshman and Sophomore, before CBU transitioned to Division 1 and joined the Western Athletic Conference.

For the last two seasons, the Vulcans managed 12-14 for the season (10-12 in PacWest play). With their new Head Coach, the Vulcans will be looking to improve on that record.

While writing this story, I have been impressed by the initiative and tenacity displayed by Ethan Jetter in setting and pursuing his goal of playing a College in the USA. Whilst he followed a pathway which is different to that chosen by most other athletes, it is a testament to his perseverance. In his journey he has won many friends, as well as the admiration of his coaches.

He also faces his first season during the challenge of a global pandemic. Hawaii is better placed than most US States, and most of the cases at present are on Honolulu. His parents have their fingers crossed that Hawaii will be included in a travel bubble with Australia, and they will have the opportunity to visit their son and see him play in person in the US for the first time.

CBR2USA is very excited to add Ethan to its roster for this season, and we will be following his progress with great interest.