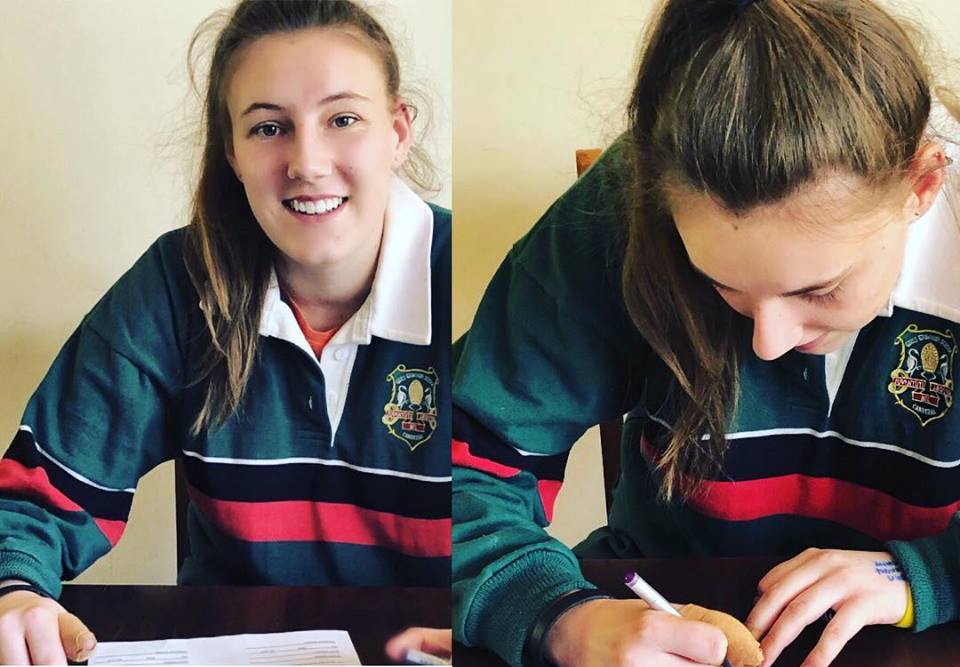 In a season that will see the CBR2USA ranks of Freshmen swell to eight (with one story yet to be released), we are very excited to be adding Emily Leslie to our US-based family.

A school- and team-mate of Rosie Schweitzer (Canberra Girls Grammar School and Redshirt Freshman at George Mason University), Leslie has signed her Letter of Intent with the New Mexico-based University of the Southwest and will head over soon to start her new adventure as a USW Mustang.

Originally a two-sport athlete, Emily was an accomplished hockey player, representing the ACT in the sport that she admits she was better at than basketball. However, when the training and playing pressures forced her to choose one sport, she opted for basketball. It was a decision that was very hard at the time, and still leaves her wondering what would have happened if she had gone through the other ‘sliding door’.

Now 5’10”, Emily has been playing basketball since she was 12 and has played most of her junior basketball with Tuggeranong Southern Cross, moving there after one season with Dodgers. Although she loved playing for TSC — in particular, for Coach Parkins — she transferred to the Canberra Girls Grammar School team when she moved schools from Telopea Park School.

Playing in the local competition for your school and in a Division 1 team was one thing, but when the prospect of a college offering was dangled in front of her, Emily took a while to accept that it was even a possibility, let alone a probability.

“When I was younger, I wanted to be a professional athlete, but I never actually thought I would go to college in the US.”

However, when an invitation to attend a recruitment seminar with IAM-360 resulted in her accepting their representation, she began entertaining thoughts that it might become a reality.

“I remember when she received the email from IAM-360 asking if she would agree to their representation, she automatically thought it was a ‘thanks, but no thanks’ email. I had to get her to read it again. So that was the first hurdle, … actually believing she had something to offer.”  (Jennifer Brown-Leslie)

What followed was a flurry of activity — filming games, studying hard to meet the academic requirements and training with her mentor and inspiration Shelley West — and then a lot of waiting! Any player that has been pursuing a placement in a college knows the stress of waiting for opportunities and not knowing if the right offer — or any offer — will come. Fortunately, with the help of the profile created by IAM-360 and her highlight footage, Emily soon received several.

Establishing an instant rapport with a coach is a common theme among Australian players selecting a college. For Emily, after talking with Coach Hitchcock and the new Head Coach Brewer, the decision to accept the offer from the University of the Southwest in New Mexico was an easy one.

“What really hooked me was what Coach Hitchcock said about his team and how they’re such a family and do fun stuff together. I’ve always been a big believer in being close with your teammates.” ….. “He likes the way I play and believes that I can help improve their team. It’s nice knowing that he believes in me. “

While athletes don’t always admit to having a great level of service from college recruiting companies, Emily’s experience with IAM-360 has been positive:

“IAM-360 did all of the hard work. They created my profile page on a recruiting database that College coaches have access to. We had to film my games and send them through so they could make highlight videos. They did everything – they took into account the areas of the US I preferred, the courses I was interested in, where my basketball skill set would fit etc.”

The waiting game for a scholarship offer may be over, but the adventure is about to begin. And while Emily admits to “being realistic” in her expectations from her basketball career, she loves playing the game and see this as “a great way to get an education!”

The University of the Southwest is based in Hobbs, New Mexico and plays in the Red River NAIA D1 Conference. They will play against teams with such romantic names as ‘Our Lady of The Lake’ and several branches of LSU in Alexandria and Shreveport, and during the upcoming season will travel to Kansas, Texas, Colorado and Louisiana. The Women’s basketball program is going into a period of adjustment with a new head coach appointed this year.

The team graduated five seniors this year and will be looking to improve on their 8-17 record from the 2018-19 season with their new Head Coach Devonte Brewer. The roster currently contains only one international (from Sweden) and is sure to benefit from the additional of an Australian player.

Hobbs, a fast-growing and progressive town with a population of 35,000, is a mere 15-minute drive to the border with Texas, and less than an hour from Roswell, New Mexico where fellow Freshman John Mapiou will be studying at the New Mexico Military Institute. Hobbs is one of the warmest cities in New Mexico, with a climate not too dissimilar to that of Canberra. This, as well as a proposed visit from her family, may make her first experience of a cold Christmas a little easier.

CBR2USA would like to wish Emily the very best for the season and is very proud to have another Mustang in the ‘stable’.