The eighteen-year-old John Mapiou shares one aspect of his life with his College inspiration Bul Kuol that most of us would struggle to truly comprehend — they both spend a period of their lives living in an African refugee camp. Perhaps it is fitting that this story is coming out during the week of World Refugee Day, where the plight of many of John and Bul’s compatriates has been highlighted on national television, magnifying the achievement of these two African-born local basketballers.

John, a six-foot guard who currently plays in Premier 1 Men for Norths and for the Canberra Gunners Academy, was born in Kenya in a camp near the border with South Sudan, where he spent the first three years of his life. His family moved from there to Sydney and, in 2011, to Canberra.

Now, after playing basketball for only four years, John is moving on to his next big adventure as he prepares to head to Roswell, New Mexico to take up a scholarship with the New Mexico Military Institute.

Always athletic, John grew up loving sport and played rugby league from an early age. His peer group however were frequenting the basketball courts at Belconnen — playing the game, talking about it and establishing a sense of community around the sport of basketball. Not wanting to miss out, John started playing for Belconnen Magpies, and quickly displayed an aptitude for the sport. He played U19s for Ginninderra Rats before moving to Norths, his current team.

John also followed in Bul’s footsteps by attending Lake Ginninderra College and represented the school at the Australian Schools Championships in both 2016 and 2017, winning silver medals in the Championship Division in both years.

John currently plays with the Canberra Gunners Academy, averaging almost 8 points a game. He also played in the 2018 Summer Slam, and his experience playing at this level — and training with a number of other local players who have already tread this path — prompted him to consider the option of playing for a college in the US. With encouragement from his Summer Slam coaches John created a highlight video from footage of his ASC games. Armed with this mixtape, and with help from people in the basketball community (in particular Ken Emelifeonwu — working on his shot and preparing him for the US style of basketball — and Maria Worner — taking care of the tricky administrative side), John started approaching colleges.

He considered several offers from other schools before deciding on the New Mexico Military Institute. He established an immediate rapport with the Head Coach, who — in the interest of full disclosure — made sure John understood the implications of studying at a Military Academy (early mornings, strict regime, uniform standards and high academic expectations). It was because of these aspects of the college, rather that despite them, that John decided that the NMMI was the best choice for him. 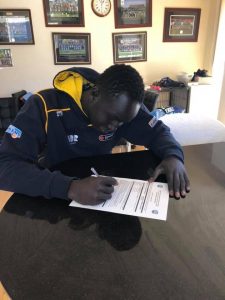 NMMI is situated within the town of Roswell, New Mexico, historically known as the UFO capital of the US following sensational news coverage of a UFO crash in the 1940s. Roswell’s tourist industry is based on alien-themed stores, museums, and other businesses. It also hosted the record-breaking Red Bull Stratos high dive (39 kilometres) undertaken by Felix Baumgartner in 2012.

The NMMI Broncos are a NJCAA Division 1 team, playing in Region 5 with junior colleges from both New Mexico and Texas. Their roster for last season included international players from Canada, Nigeria, England and France. Its alumni include Link Abrams, 2007 MVP of the NZ NBL.

Head Coach Sean Schooley is a Roswell local, playing for the NMMI Broncos for two years and returning as an assistant coach five years later. He has been coaching with NMMI for 25 years.

John will fly to New Mexico in July to participate in their pre-season. While mentally preparing for the rigours of a strict military lifestyle, he is also extremely grateful for the opportunity he has been given and plans to use this experience to further his education and take his basketball as far as possible.

CBR2USA are excited to be adding John Mapiou to our roster for the coming season, and look forward to following his progress.