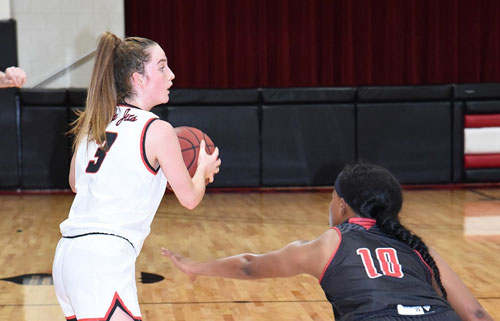 Abby Solway arrived in the USA less than a month ago. In a period of four short weeks she has placed her stamp on a team that is among the best in its class.

Her introduction to College basketball will have resembled a whirlwind.  With hardly enough time to thoroughly understand the Lady Jets playbook, she has been elevated to starter and is already averaging almost 13 points per game.

In her latest two outings she was the game highest scorer, with 28 points and 15 points respectively.  In the match-up against Albany State, Abby shot at 50% overall with her haul including 8 from 16 from beyond the arc.  She followed this up against Shelton State by shooting at an even higher clip, managing 5 from 7 at 3-point range.

Abby looks set to have a massive Freshman season in a team that has yet to be beaten and is currently ranked 4th in the NJCAA D1 women’s national standings.

James Toohey and AJ Rodriguez recorded game-topping scores this week, scoring 15 points and 17 points respectively.  They were joined in double-figure results by Bul Kuol (10 points), Callie Bourne (11 points) and Ethan Jetter (13 points).  Callie also dished out a game-high five assists in her only game this week.

While Issie Bourne is still nursing an ankle injury, Maris Colton has recovered from his shoulder injury and has returned to the court.