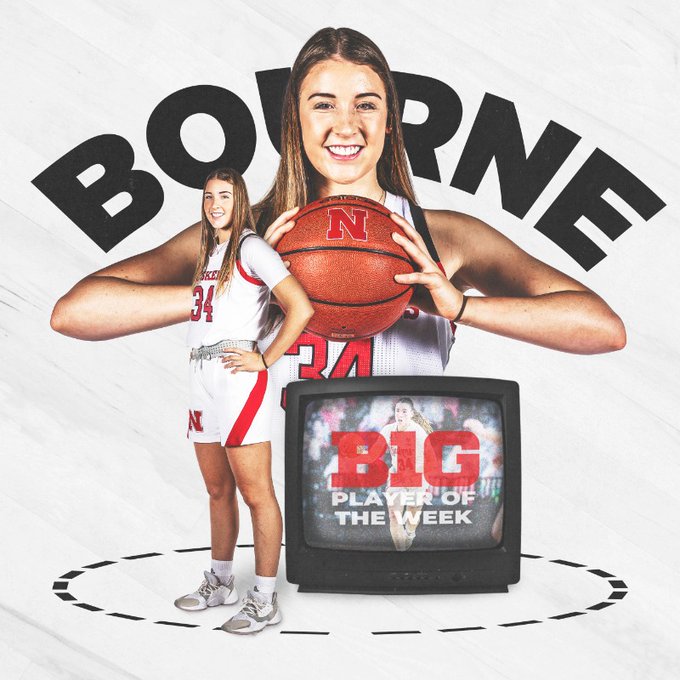 Canberra has so much to be proud about when it comes to Isabelle Bourne. Averaging 21.5 points and 14.0 rebounds in her two games last week, Issie was granted accolades at both the national and Conference level.

“In the victory at No. 24 Northwestern on Wednesday, Bourne scored 21 points and pulled down a career-high 17 rebounds in the 71-64 win over the Wildcats. Bourne also dished out two assists, blocked two shots and recorded a steal in helping the Huskers to a season sweep of the defending Big Ten co-champions.

In Sunday’s win over Penn State at Pinnacle Bank Arena, Bourne tied her career high with 22 points while adding 11 rebounds, two assists and two blocked shots to help the Huskers run to an 87-72 win over the Lady Lions.

Bourne, who has posted three straight double-doubles and owns five on the season, has increased her season averages to 14.4 points, 8.2 rebounds, 2.4 assists and 1.1 blocks. Her 8.2 rebounds ranks No. 7 in the Big Ten.”  (Full story on KSNB News)

“Bourne, a 6-2 sophomore from Canberra, Australia, produced the best week of her career with back-to-back double-doubles in wins at No. 24 Northwestern (Feb. 17) and against Penn State (Feb. 21). “ (Full story on Huskers News)

The Cornhuskers are currently 11-9 for the season (9-8 in Conference play) and are ranked 8th in the Big Ten standings (which, incidentally, contains 14 teams).

Callie Bourne recorded her second double-double for the season – including a game-topping 13 rebounds – in her second game this week.   The Bengals are having a breakout season, having recorded only 3 losses so far.  They are 12-2 in Conference play, and are currently sitting at the top of the Big Sky standings.

Despite having racked up game-high and team-high scores and rebounds all season, Bul Kuol recorded his first double-double for the season this week.  The Titans have now concluded their season proper, after recording 10-6 in Conference play.

The continued atrocious weather in the States has interrupted the play of some teams, with a few of our athletes not being able to take to the court this week.