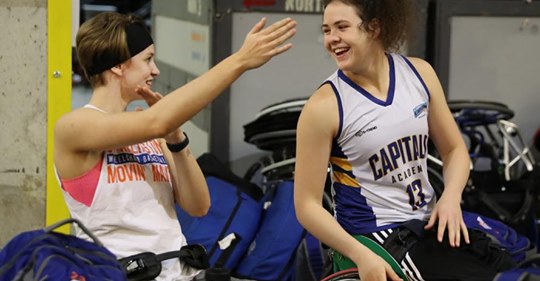 Annabelle Lindsay’s University of Texas Lady Movin’ Mavs are one of the top adaptive sports women’s basketball lineups on the Collegiate circuit.  Last season they narrowly missed out on the National Intercollegiate Wheelchair Basketball Tournament, only their second loss for the season.

This season, Bella has been named Team Captain and is being recognised as the cornerstone of the Lady Movin’ Mavs — bringing leadership, maturity and athleticism to a team that is looking to maintain its position at the top of the ladder.  From ‘Lady Movin’ Mavs Prepare to Shock the World‘, the following of our Bella:

“All eyes are on … Annabelle Lindsay. The towering high-pointer has quickly become a key component on the court since her debut in the spring of 2018.
Everyone knows who she is and what she’s capable of…. The whole world does.”

During the UTA Lady Movin’ Mavs Home Tournament this week, Bella registered game high performances in both games, scoring 18 in the loss to Great Britain and a MASSIVE 37 points in their win against Milwaukee.

Mikala Williams made her debut for the Harcum Bears in style as she managed 11 points, 4 steals and a massive game-high 6 assists.

In his first game as a sophomore, Stuart Phair has been elevated to starter, recording a team-high 16 points – as well as five rebounds and a couple of blocks – in the Sage Gators’ overtime win against Elms College.

Rob Colton registered a game-high 10 rebounds in his first game of the season, starting the season as usual with a win in a 100+ game against Montclair State University.

James Toohey‘s SVSU Cardinals suffered their second loss for the week against Bellarmine University, but Toohey topped the second game in assists (3).

Glenn Morison‘s campaign kicked off with back-to-back wins with team-high rebounds (8) and a career- and game-high 3 blocks in their season opener against Jackson State.

Woes of the Week